Bıçak Lawyers has extensive experience of representing young people who find themselves involved with the Criminal Justice System for the first time whether that be at the police station or appearing before the Court. It can be extremely daunting for someone has never had any involvement with the police before as well as for their parents who may have had no prior experience of being questioned, detained, arrested or appearing in court and may fear the worst. At Bıçak we are able to give realistic advise about likely outcomes and what we can do to secure the best outcome for your child. We are available 24/7 and work nationwide of Turkey. 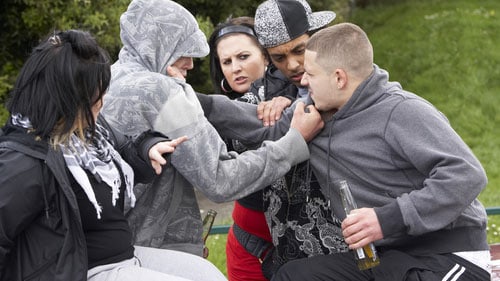 Applying the law to children and young people is a specialist area of law, so it is important to get legal advice from experienced youth crime lawyers / Attorneys / solicitors at the earliest opportunity. There are special procedures in place for young people who are suspected of a crime and we understand that the criminal justice process can be confusing, intimidating and frightening for a young person. We also recognise that it can be an extremely distressing and unsettling time for parents and guardians too.

Violence is intentional injuries caused by an aggressor, or person with the intention to hurt or kill another person, or group of people, by using excessive physical force. Violence can include such acts as physical force, and violence involving motor vehicles, weapons or firearms, among other causes.

When one person attacks another, and an injury occurs, Turkish Criminal Justice System views the event as a violent crime. By definition, such crimes inflict physical harms on the victims. But the important social consequences of these attacks go well beyond the immediate trauma to the victim. The victim suffers psychological damage as well as physical pain. Others in the society may be frightened by the experience of the victim and become concerned that they, too, are vulnerable.

Common sense dictates that such attacks are morally wrong as well as simply harmful, and that those who commit such offenses should be held accountable for their misconduct.

Accidents are predictable and preventable. Accidents, include, but are not limited to, the following most common examples:

“Youth violence” is a term describing violent acts involving children, adolescents, and young adults between the ages of 12 to 21 years old. A young person can be the victim, perpetrator, or both of youth violence.

Youth violence includes a range of acts from bullying, slapping, hair-pulling and physical fighting, to more severe hitting someone with an object, punching and physical assault to homicide. These acts may be against another teenager or an adult.

With the increase in technology, cyberbullying is unfortunately becoming more common, especially among school age children. Cyberbullying refers to a situation where a person uses technology to threaten, intimidate, harm or harass another person.

Cyberbullying generally occurs through interactions over cell phones (texting, photo sharing, other apps), social media platforms or other interactive Internet sites. The behavior is usually repetitive, persistent and damaging to the victim.

Some common examples of cyberbullying are;

The age of criminal responsibility in Turkey

The age of criminal responsibility in Turkey is 12 years old. Minors under the age of twelve are exempt from criminal liability. This means that children under 12 cannot be arrested or charged with a crime. Children under 12 who come to the attention of the police or public prosecutor may be asked to attend a ‘safeguarding interview’ following consultation between the police and social services. The interview is designed to provide ‘words of advice’ to the parent and child regarding the child’s future conduct. While such minors cannot be prosecuted, security measures in respect of minors may be imposed.

Young people aged 18 are treated as adults by the criminal law. If your child turns 18 during criminal investigation by the police or criminal proceedings before the public prosecutor pf the court, the legal status of your child does not change since your child was under 18 at the time he / she committed an offence.

Where a minor is older than twelve, but younger than fifteen, at the time of an offence, and he is either incapable of appreciating the legal meaning and consequences of his act or his capability to control his behaviour is underdeveloped then he is exempt from criminal liability. However, such minors may be subject to security measures specific to children.

Where the minor at the age of 12 to 15 has the capability to comprehend the legal meaning and result of the act and to control his behaviours in respective of his act, for offences requiring a penalty of aggravated life imprisonment, a term of twelve to fifteen years of imprisonment shall be imposed and for offences that require a penalty of life imprisonment, a term of nine to eleven years imprisonment is imposed. Otherwise, the penalty to be imposed is reduced by half, save for the fact that for each act such penalty may not exceed seven years.

Any person who intentionally causes another person physical pain or who impairs another person’s health, or ability to perceive, is sentenced to a penalty of imprisonment for a term of one to three years.

Where the effect of an intentional injury upon a person is minor and can be cured by a simple medical treatment then, upon the complaint of the victim, a penalty of imprisonment for a term of four months to one year, or a judicial fine is imposed.

Where an intentional injury is committed;

the penalty to be given is increased by one half and does not require a complaint.

If the act of intentional injury results in;

then the penalty to be determined according to the intentional injury provisions is doubled.

If the act of intentional injury results in;

then the penalty to be determined according to the intentional injury provisions is doubled.

Where the intentional injury results in the death of a person, the offender is sentenced to a penalty of imprisonment for a term of eight to twelve years for some and twelve to sixteen years for some other offences.

Injury is divided into two categories in Turkish Law as “minor injury” and “serious injury”. Minor injury means that an injury can be cured by a simple medical treatment. In case of minor injury, criminal investigation may only be started by the public authorities (the public prosecutor and the police) upon the complaint of the victim.

Teenagers often act more impulsively and irrationally than adults. This can lead to a teenager acting violent to the point where they are arrested for and charged with a crime, which can then ruin their life before it even really began. If you or a family member is facing a criminal charge as a result of youth violence, contact our specialist criminal lawyers / attorneys / solicitors representing young people. Our lawyers will be able to advise you as to the strengths and weakness of your case, and help you chose the best course of action.